Install and run the GDL2 Editor

Install and run the GDL2 Editor

Before getting started, the GDL2 Editor (GE) needs to be installed. GE is a java-based, multi platform application used to create, edit, and run GDL files. GDL files (guides or guidelines) contain the clinical knowledge and application logic required for computerized clinical decision support. The GDL2 Editor is natural language- and reference terminology agnostic and has integral support for data models from two popular open health care data specifications – openEHR and HL7 FHIR. It leverages on the Reference Model and Archetype Model of openEHR as well as the Reference Information Model and Structure Definition of HL7 FHIR. The GDL2 Editor is used to define sets of rules as well as trigger events based on statements obtained from a reference clinical guideline. In addition to defining guideline rules and triggers, the GE also generates data entry forms based on the underlying archetypes or profiles which allow the user to input data that triggers the rules. When integrated with an EHR system, input data can be automatically acquired from the patient records triggering the decision support logic resulting in the relevant guideline-based recommendation.

Run the GE in the following way:

Install the GE by downloading the gdl2-editor-v3.0.3.zip file. Unpack the zipped folder and double-click on gdl2-editor.exe. The command prompt shall appear with a message saying that the application has started. Keep the command prompt open for as long as you want to use the GE.

Please note that this alternative only works with Windows machines. Please try the installation with Docker if you are using another operating system.

To launch the GE, open browser to “localhost:8080/gdl2-editor”

After installing and running the GDL2 Editor, the following start-up screen will be displayed upon launching the program. The archetypes and profiles that will be used will first need to be imported to the GE. To do this, click on File in the menu bar, select Load Guidelines, Archetype, FHIR resources, click on Select file(s) and then choose the file that will be used. Multiple files can be compressed and be uploaded as a single zip file. 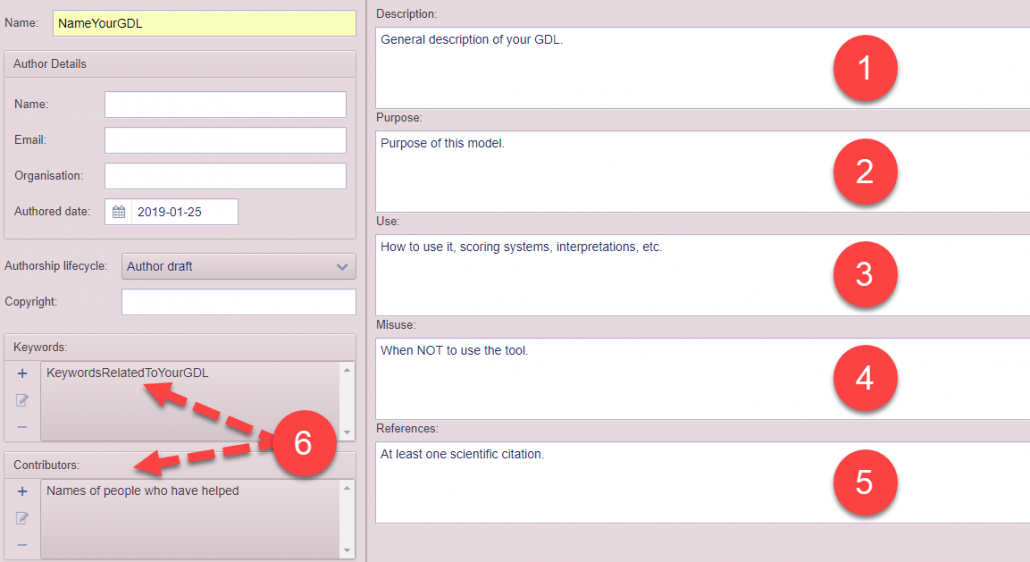 In the Description tab, one is able to insert the name of the guide, author details, copyright, keywords, and contributors, as shown on the left side of the image above. The text fields on the right side numbered 1-5 above, can be filled in directly. Keywords and contributors can be added by using the plus sign (6). The pencil on the paper icon can then be used to edit the entered text.

Once all the metadata is filled in, ensure the model is saved by clicking Guideline in the menu bar, selecting Save Guideline to a File, enter the file name, and clicking the checkmark.

When the Definitions tab is clicked, the following view will be displayed. The left side contains the selection of definitions that can be used in this screen of the editor. 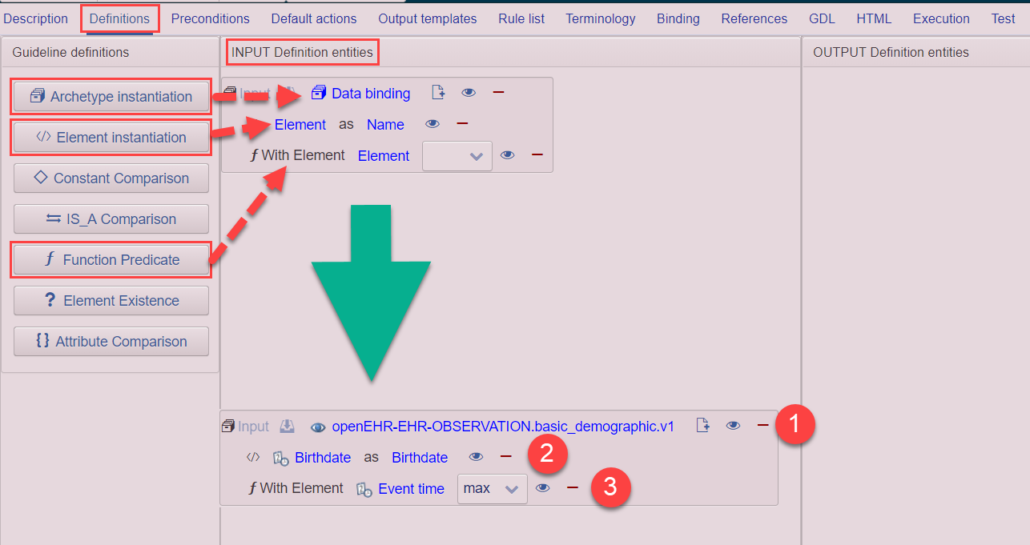 Multiple archetypes may be instantiated depending on the model being built. In addition, the same archetype can be instantiated in different formats: INPUT and OUTPUT. The type is selected in the window opening upon clicking on Data binding. 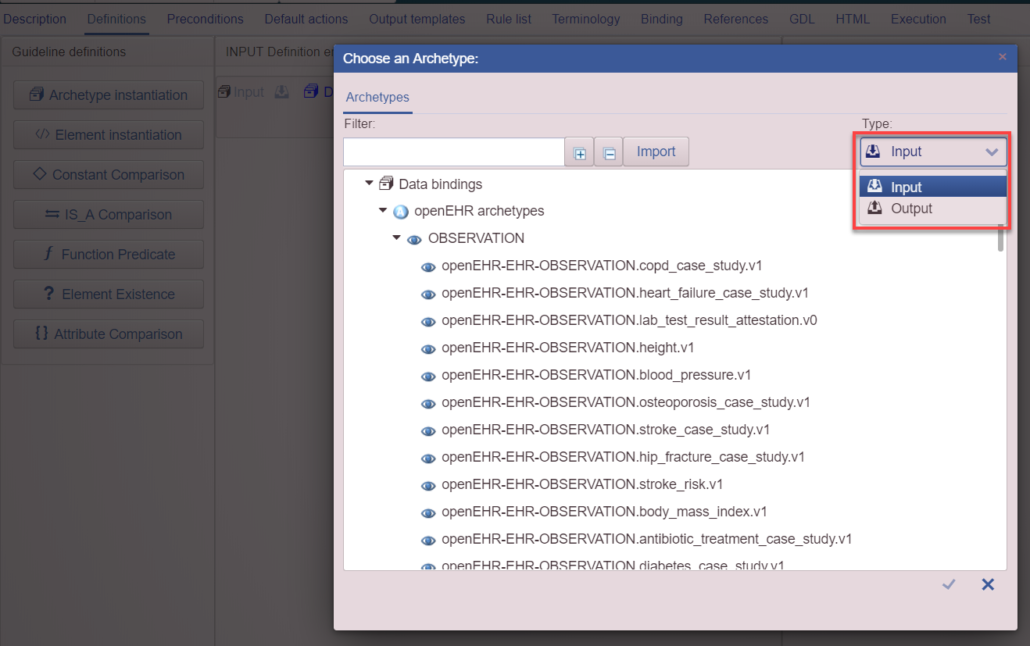 In this image, both an INPUT and an OUTPUT type of the “Basic Demographic” archetype has been instantiated. The INPUT contains the birthdate element, allowing users to enter it using the date data type in the GE. This instantiation will contain user input.

The second instantiated archetype is of the OUTPUT type, containing the age element is displayed. This element is a quantity data type that will allow the model to store the actual age value. The birthdate input along with the current date entry will allow the age value to be calculated using a simple rule.

Once all the archetypes/profiles have been instantiated, rules can be constructed by heading to the Rule list tab. In order to demonstrate this in a simple way, the two basic demographic archetypes that were instantiated can be used to model a basic rule.

The empty modeling area related to the rule can be filled with the conditions listed on the left side of the screen.

There are five comparison conditions:

In order to calculate the age, one condition is required: the Element Existence.

Drag and drop the Element Existence condition from the Condition types box on the left side into the Rule conditions area. Then click on the Element field to choose the element Birthdate: 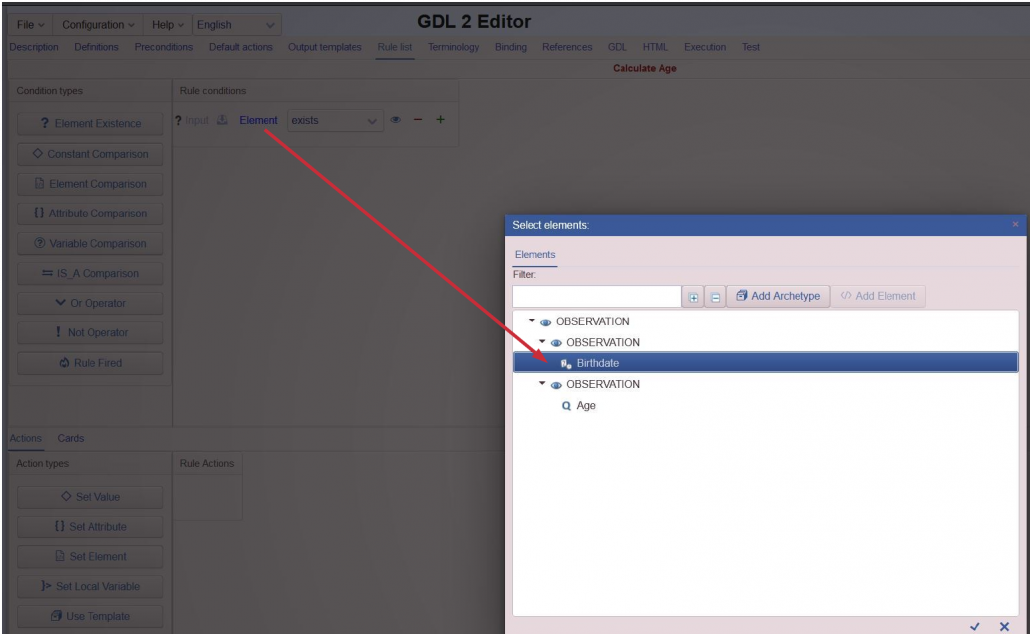 Next, select exists from the drop-down menu (default in this case).

The condition: “Birthdate exists” ensures that there is a birthdate input from the EHR or user input before the rule is fulfilled – which is set in the bottom half of the screen. 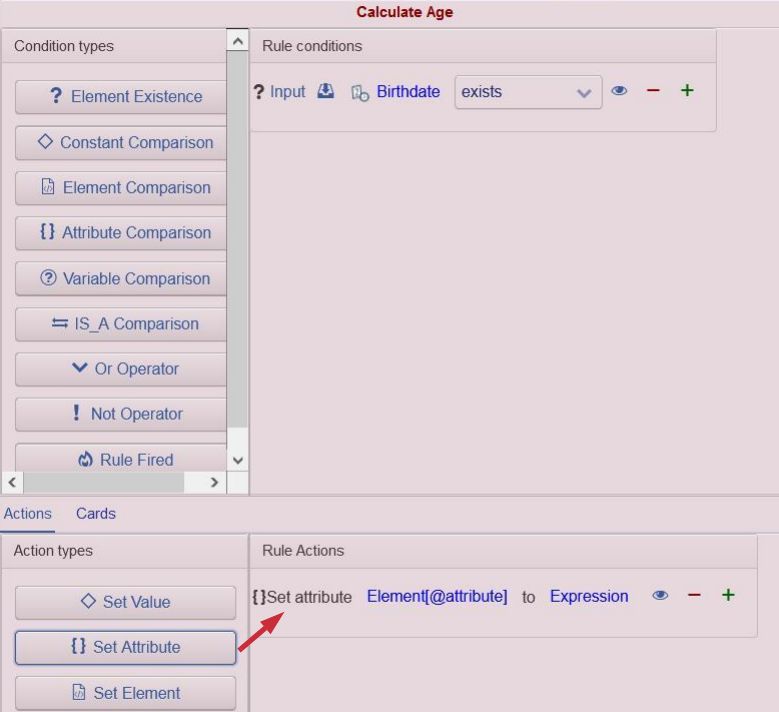 From the actions panel, the Set Attribute is dragged and dropped to prepare the actions that will be fired once the condition is fulfilled.

These actions are to set up the age on two attributes that are placed into two instantiated Set Attribute entries. 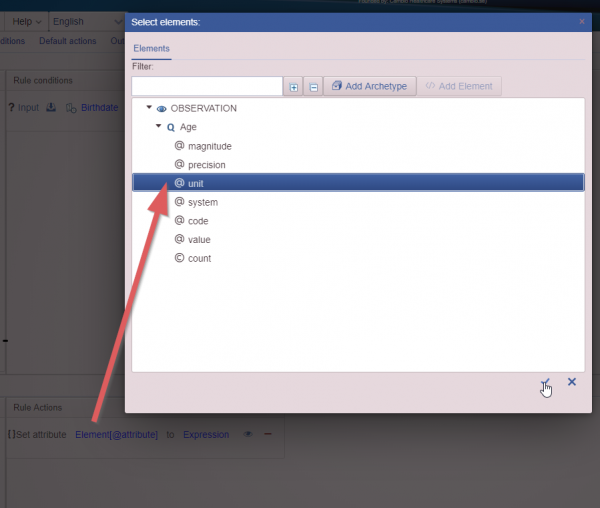 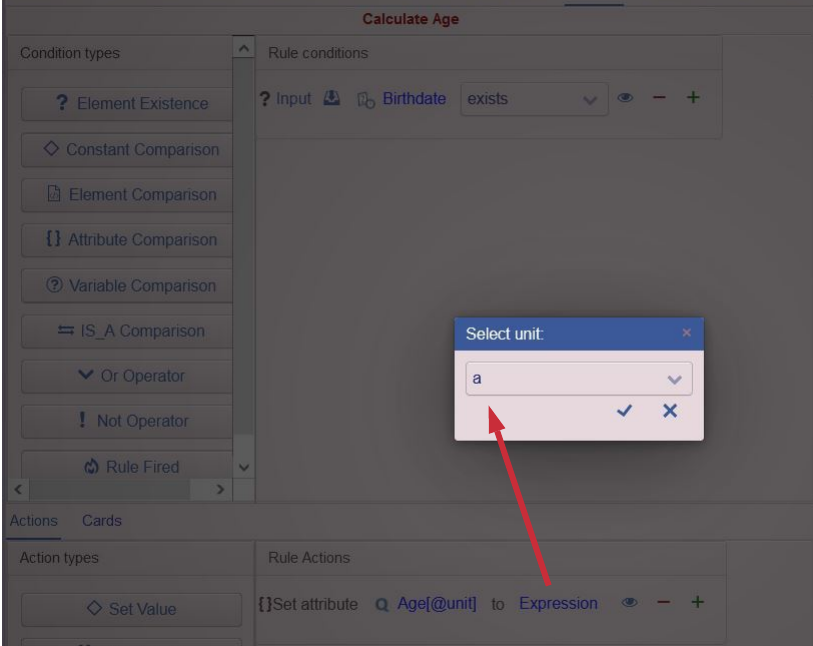 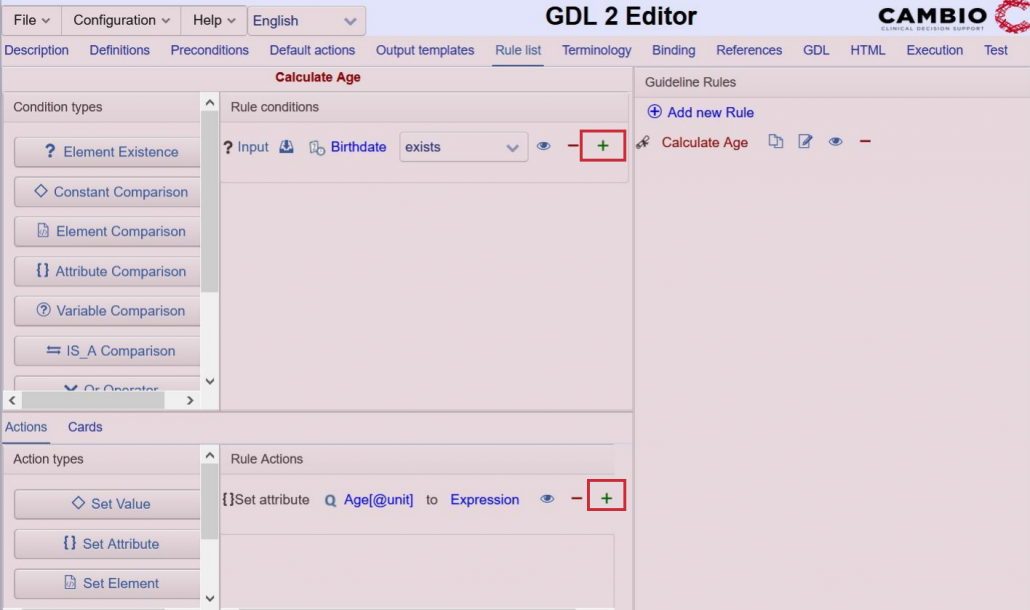 This opens up a small window with a list of Action types and from this, the Set attribute is selected. 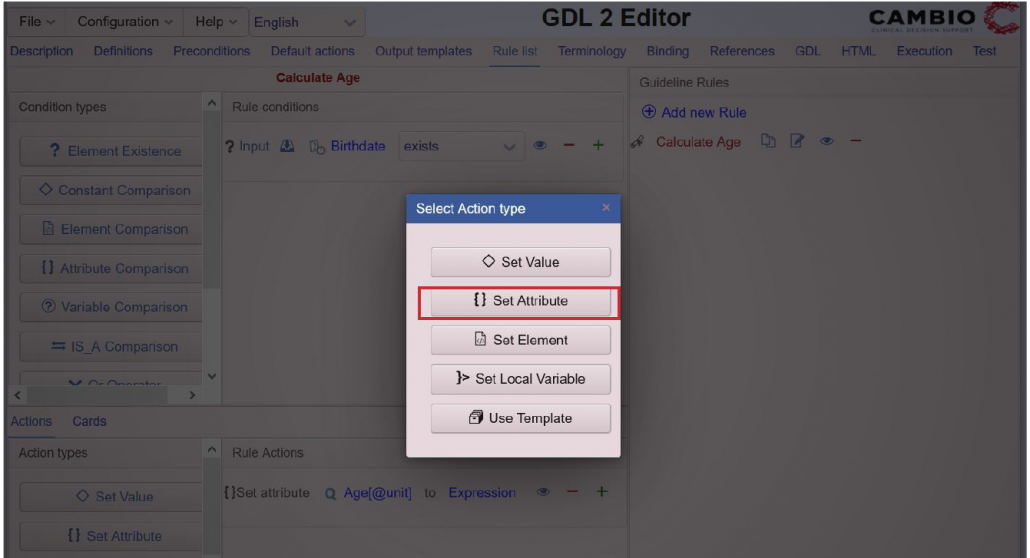 Then, the attribute, Age magnitude is added. 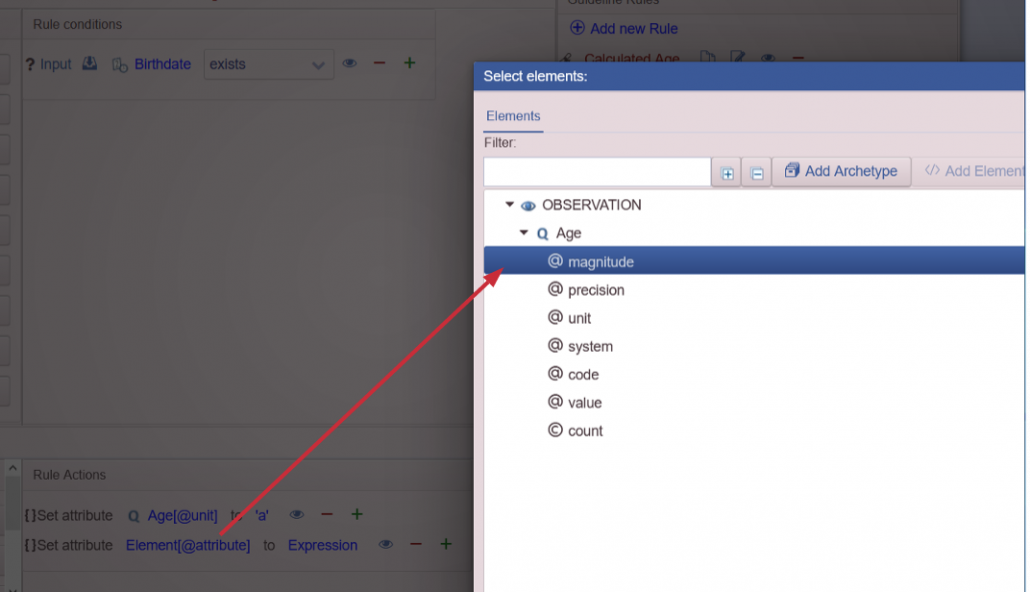 The calculation is added to the Create Expression editor as shown above. 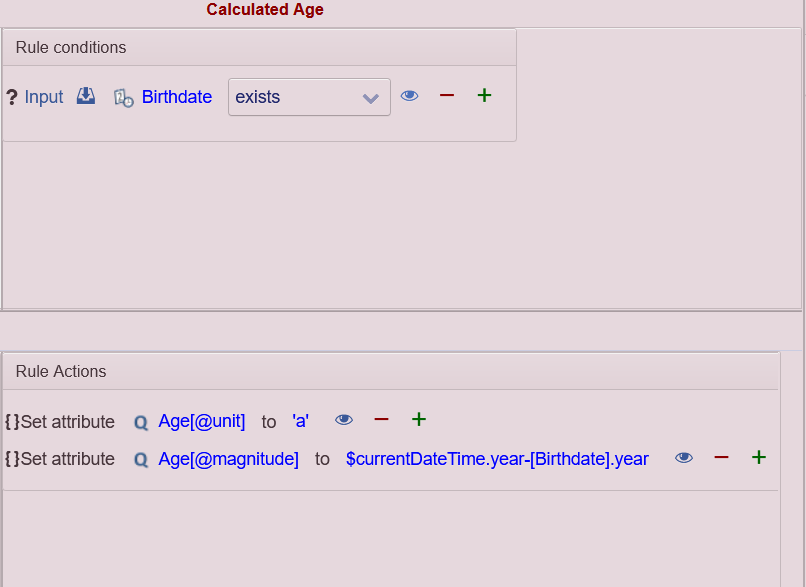 Once the rule has been completed, ensure the model is saved.

The created rule appears in the section Guideline Rules as shown above. We can now test that the rule works using the Execution tab.

Go to the Execution tab and click on the Refresh button to generate the execution input fields. 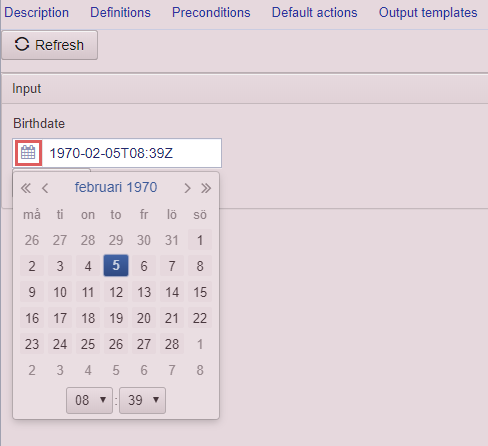 The result is shown below – Age 50 years: 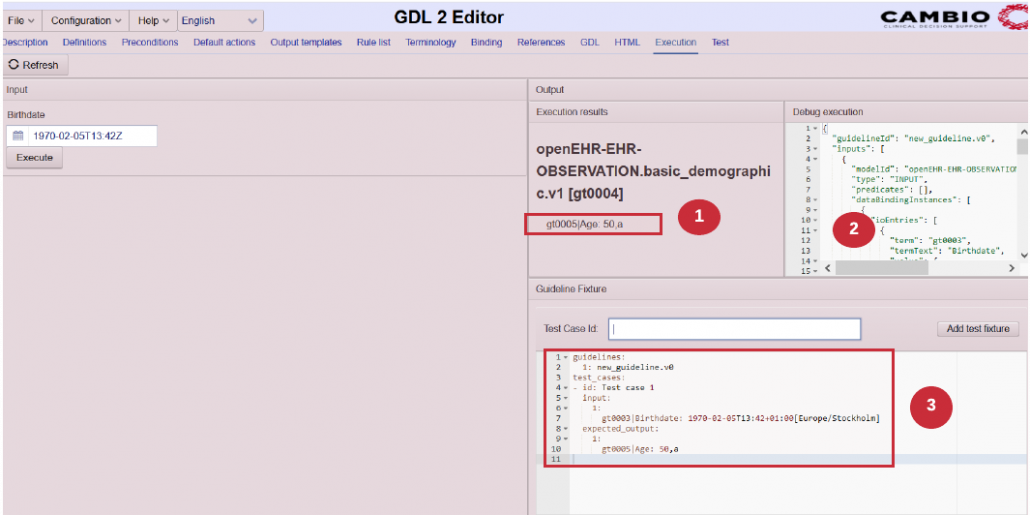 In the image above, a Constant Comparison condition element is dragged and dropped into the top half of the modelling area for a rule named: “Set age between 16 years and 45 years”.

The Age element of the Basic demographic archetype in the OUTPUT format (as it has been calculated from the birthdate as shown in the earlier part of this guide) is selected for the element type and the age 45 years is inserted. As the condition is an age range, greater than and less than operators are used as shown in the series of images below: 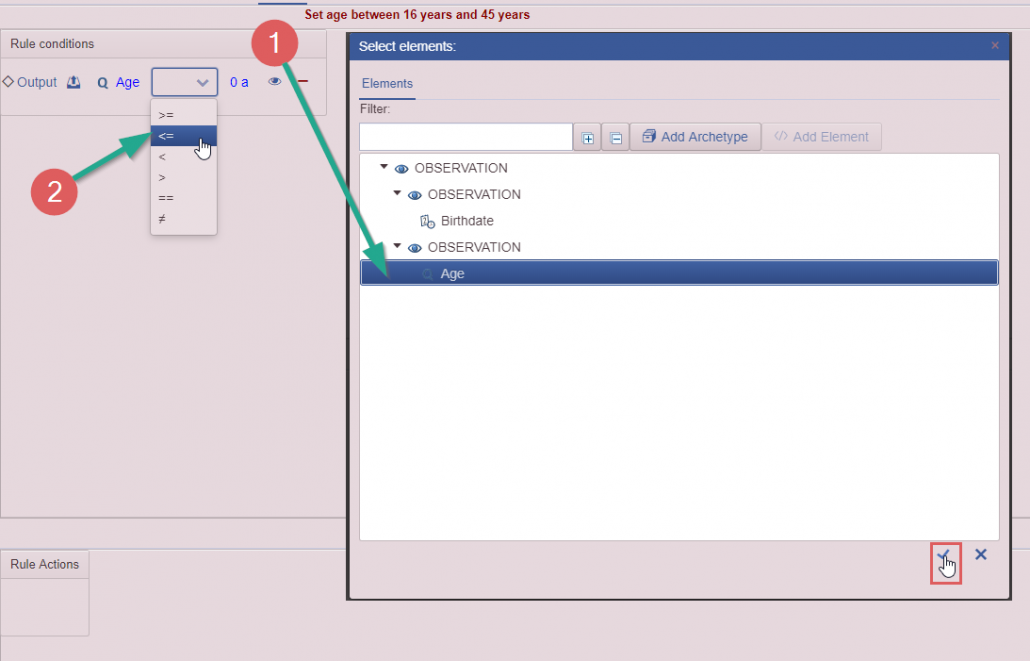 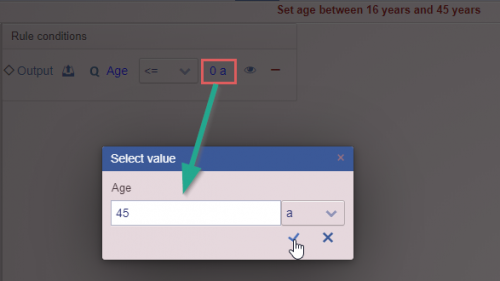 The first condition is Age <= 45 years as filled in on the image; “a” is “anno” which is Latin for year. The second condition, Age >= 16 years, is added in the same way and both are shown in the image below: 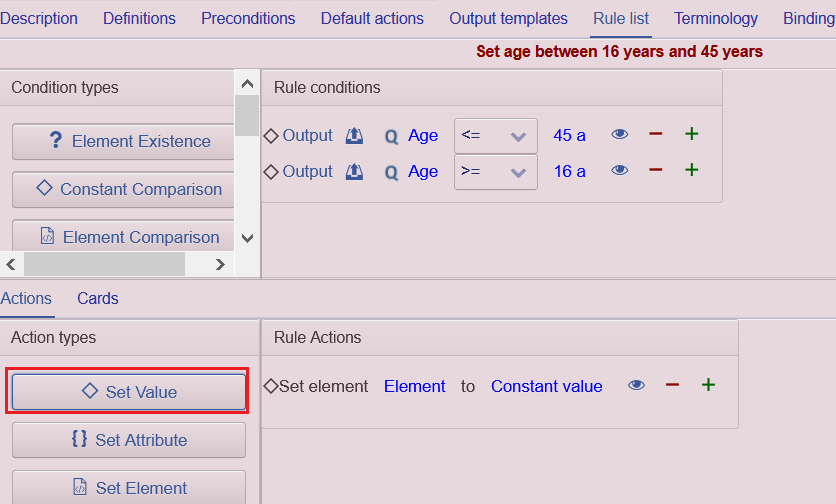 In order to enable a rule, we need to drag and drop action from the left as shown. However, our model is lacking an archetype that can hold the results of the condition we set in the top half of the screen, namely what to do with a value that is in the range as indicated. Thus, to do this, we would need to create/instantiate a slot of an archetype that would be able to hold this result. If we go back to the Definitions screen of the GE, we can add an archetype (here we added the “Opioid Risk Tool” archetype) which requires an ordinal slot that handles age ranges. This is shown below: 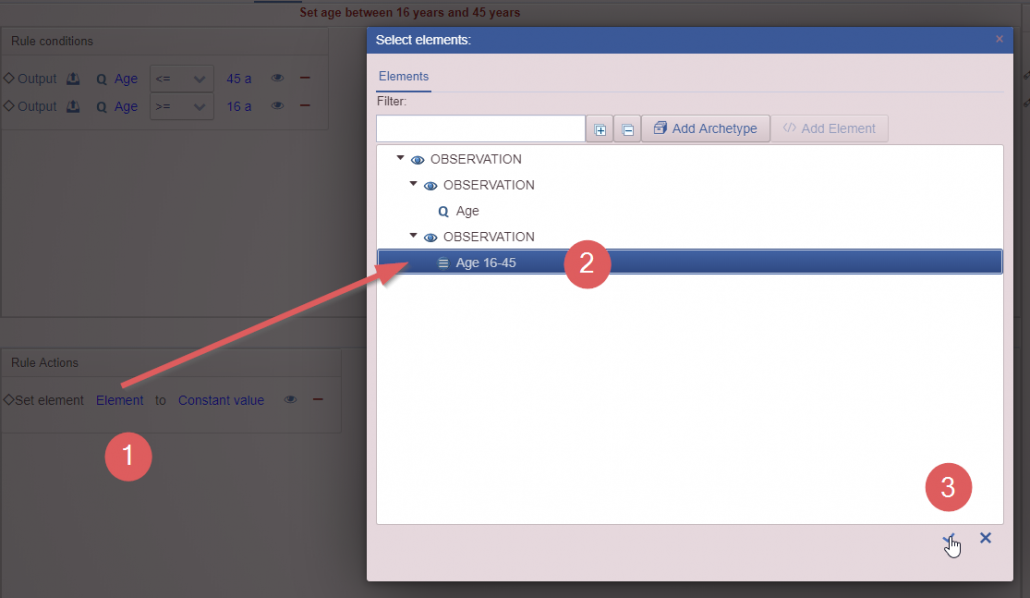 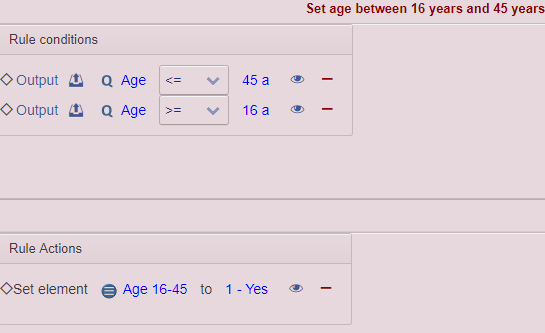 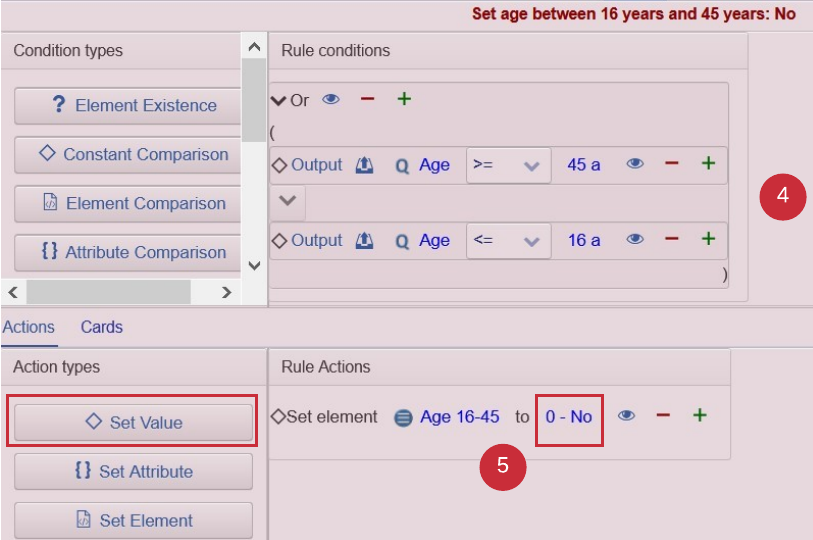 The test fixture is saved to a separate file by clicking on the Save button next to the Execute button.

Name the file in the following convention:
guideline_name.guideline_version.test.yml

The test fixture can now be uploaded in the Test tab at a later time and be used to verify that any changes made to the guideline have not introduced errors to the execution.

Most basic guideline models do not require any further steps, but more complex models set constraints in the Preconditions tab. This function provides a way to limit rule firing until a certain condition has been met.

The Default actions tab contains rules that set baselines. For instance, the order of firing of rules is important in the GE as it runs from top to bottom, and if a user inputs a field but skips a previous one, the model may not fire at all. Thus, setting default values helps to ensure the model passes through all the rules to provide responsivity to the model and a baseline or neutral result is issued once the Execute button is pressed. These baseline values can be an ordinal of 0 as either NA (Not available) or the tag attached to a zero value – usually “No”. The Opioid Risk Tool used earlier has more ordinals than the age range used above. The image below displays how some of these ordinals would be set to “No” as a baseline default value in the Default actions tab:

The Binding tab and associated Add Binding button allow for the binding or mapping of codes from other code systems such as ICD10 (International Classification of Diseases 10th Edition). Again, this is discussed in more detail in later examples that utilize this function.

The GDL and HTML tabs display the model in either GDL or HTML format, which is close to displaying the guideline in a presentable web-based form. These screens are shown below: 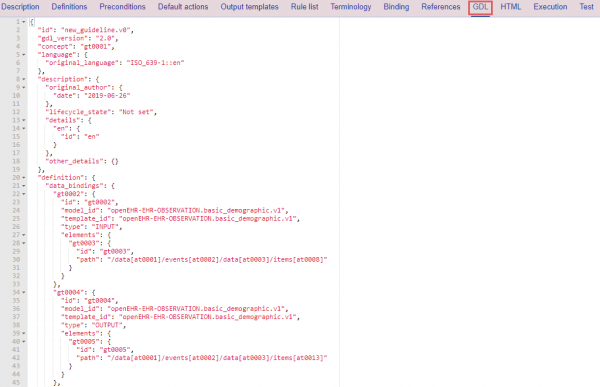 This is the end of the basic GDL2 Editor guide.